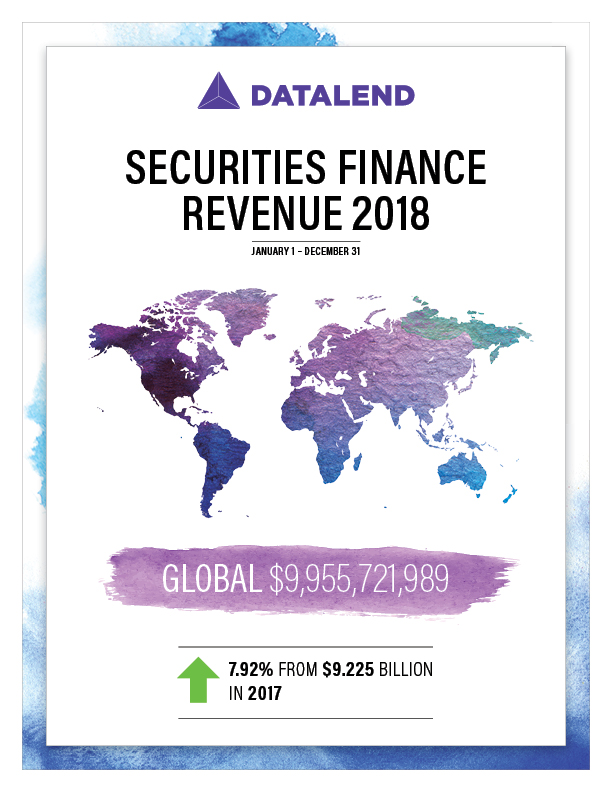 NEW YORK (January 3, 2019)—The global securities finance industry generated just under $9.96 billion in revenue for lenders in 2018, according to market data provider DataLend.

It was a record year in terms of revenue generated for investors that lend out securities from their portfolios, referred to as beneficial owners, since DataLend began tracking the market in 2013. Beneficial owners include asset managers, insurance companies, pension funds and other institutional investors.

According to DataLend, factors that impacted the revenue increase in 2018 included:

Nancy Allen, Global Product Owner of DataLend, says: “While early industry estimates suggested revenue may exceed $10 billion in 2018, the securities finance market finished the year just shy of that mark. However, 2018 was a very positive story with gross revenue up 8% compared to the year prior, primarily driven by higher market values.”

Regionally, EMEA and APAC revenue was up 20% and 30% respectively in 2018; both regions benefited from a significant increase in volumes, while spreads increased only slightly. The only region not to see an uptick in revenue was the Americas, which dropped 6.5% year over year.

Echoing the trend, EquiLend’s NGT securities finance trading platform also experienced record growth, with a 35% increase in the average daily notional value traded on the platform in 2018 compared to 2017.