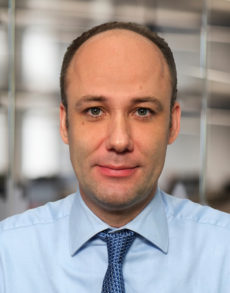 Securities finance revenue in Asia ex-Japan for the first half of 2017 fell when compared to the same period in 2016. Overall revenue for the region was down by 17% year over year, from $615.4 million in 2016 to $508.5 million this year. Although Taiwan was a bright spot in the region, the drop in revenue was mostly driven by borrowing fees decreasing in Hong Kong and Korea, where lending revenues slipped by 18.8% and 23% respectively. However, increases in fees and revenue in the real estate and information technology sector for some countries in the region helped to mitigate part of the revenue downturn.

Revenue decreases in Hong Kong year on year were driven by a deterioration in lending fees, which dropped from an average of 190 bps at the beginning of 2016 to a low of 102 bps in early May 2017, before recovering to around 140 bps by the end of Q2. The Hong Kong securities finance market grossed $156.3 million as fees averaged 124.9 bps for the first half of 2017, an 18.8% decrease from the $192.5 million in revenue earned during the same period last year.

Concerns over Mainland China’s real estate developers helped to fuel higher fees in the Hong Kong real estate sector, which generated $28.3 million in revenue. Much of the second quarter of 2017 recovery in fees was due to a short squeeze in Evergrande (3333 HK). While share prices increased, fees to borrow also rose to generate $12.1 million. Another in-demand real estate sector equity was Fullshare (607 HK), which grossed $9.6 million.

The Consumer Discretionary and Information Technology sectors both helped to mitigate the overall decline in Hong Kong revenue. Consumer discretionary grossed $35 million in revenue as fees averaged 151 bps for the first half of 2017, while the information technology sector saw year-over-year revenue rise to almost $20 million from $13.1 million.

Familiar names such as China Huishan Dairy (6863 HK), Evergrande and BYD (1211 HK) continued to dominate the top earners in Hong Kong for 2017. However, some of these securities illustrate how Hong Kong has been cooling recently compared to years past: China Huishan Dairy, for example, was the largest securities lending earner for Hong Kong in the first half of 2016 to generate $28.8 million, accounting for 15% of total revenue. For the first half of 2017, this security accounted for just 2.75% of total revenue in Hong Kong.

Korea, which was one of the hottest markets in the world last year, saw a significant deterioration in fees to borrow from a high of over 470 bps on October 21, 2016, to a low of around 250 bps in March this year. Fees have since increased to average 290 bps for the first half of 2017. Overall, securities finance revenue for South Korea totaled $145.3 million for the period, down 23% from the $189 million realized in the first half of last year.

Healthcare remained the top-earning sector in Korea, generating $53.35 million with fees averaging 475 bps for the first half of 2017. However, revenue was down 45% from the $97 million generated from average fees of 969 bps from the same period last year. Celltrion (068270 KS), which maintained its position as the largest revenue generator for the first half year of 2017 with revenue of $25.5 million, saw a very significant $50 million drop in revenue from the same period in 2016 as fees fell during the first half of 2017. Other notable healthcare names include Hanmi Pharmaceuticals (128940 KS), Samsung Biologics (207940 KS) and Yungjin Pharmaceuticals (003520 KS), which grossed combined revenue of $8.8 million.

Information technology was the second top-grossing sector in Korea, generating $27.3 million as fees averaged 295 bps for the first half of 2017. Unlike healthcare, Korea’s IT sector experienced 27% year-over-year revenue growth from the $21.5 million grossed in the first half of 2016.

The percentage of balances trading special (i.e., with fees over 500 bps) in Korea fell from 26.61% in H1 2016 to 17.13% by late June 2017. Balances between 250 bps and 500 bps increased from 24% of overall balances to 33%, while GC balances remained relatively unchanged for the first half of 2017. Despite recent tensions with North Korea, overall fees to borrow Korean assets continued to trend lower by the end of summer.

Overall revenue for Australia fell 31.1% from $70 million for the first half of 2016 to $48.2 million for the same period this year as the number of specials in the market decreased. The decline was reflected in the revenue for the top-five earning securities, which dropped from 31% of total revenue in Australia last year to just 22% for the same period in 2017. The largest unwind was Fortescue Metals (FMG AU), which accounted for 14.6% of total revenue ($10.23 million) in the first half of 2016, as iron ore prices recovered and Fortescue’s financial outlook improved this year.

The Australian market saw a shift in balances away from materials into consumer staples from 2016 into 2017 as commodity prices improved. Revenue from lending Australian materials securities generated $10.28 million in the first half of 2017 on much lower average fees of 49.18 bps; that represents a 41% revenue decline from the same period last year. Australian consumer staples generated $8.6 million during the first half of 2017. Some consumer staples firms faced international regulatory challenges, such as Bellamy’s (BAL AU), which had its import license into China suspended; as a result, more than $800,000 was generated from lending that company’s stock in H1 2017. Blackmores (BKL AU) also faced difficulties as it changed its strategy of selling directly into China; that security yielded $3.95 million in revenue for the first half of 2017.

Aside from Japan (see article on page 33), Taiwan was the only other major market in the Asia region to post an increase in lending revenue for the first half of 2017 versus the same timeframe last year. Taiwan realized impressive revenue of $105.7 million on high fees averaging 263 bps for the first half of 2017, representing a solid 16% increase in revenue from 2016. Part of the rise may have to do with the Taiwan Stock Exchange’s move in February 2017 to make looking up securities finance rules easier for participants.

Taiwan’s securities finance market continues to be driven by the information technology sector, which saw fees averaging 269 bps to generate $59.4 million, or 56%, of total Taiwanese revenue. Information technology suppliers to Apple, specifically its iPhone product, continue to be in focus.  Firms such as HTC (2498 TT), AU Optronics (2409 TT) and Hannstar Display (6116 TT) dominated the top earners in Taiwan and were responsible for $10.6 million in revenue for the first half of 2017.

The consumer discretionary sector in Taiwan saw a 39% revenue increase year over year, from $11.6 million during the first half of 2016 to $16.2 million the same time this year on higher average fees of 333 bps and a larger average on-loan balance of $980 million. Companies such as Eclat Textile (1476 TT), Hota Industrial Manufacturing (1536 TT) and Tatung Co. (2371 TT) dominated the sector and were responsible for $4.6 million in revenue. 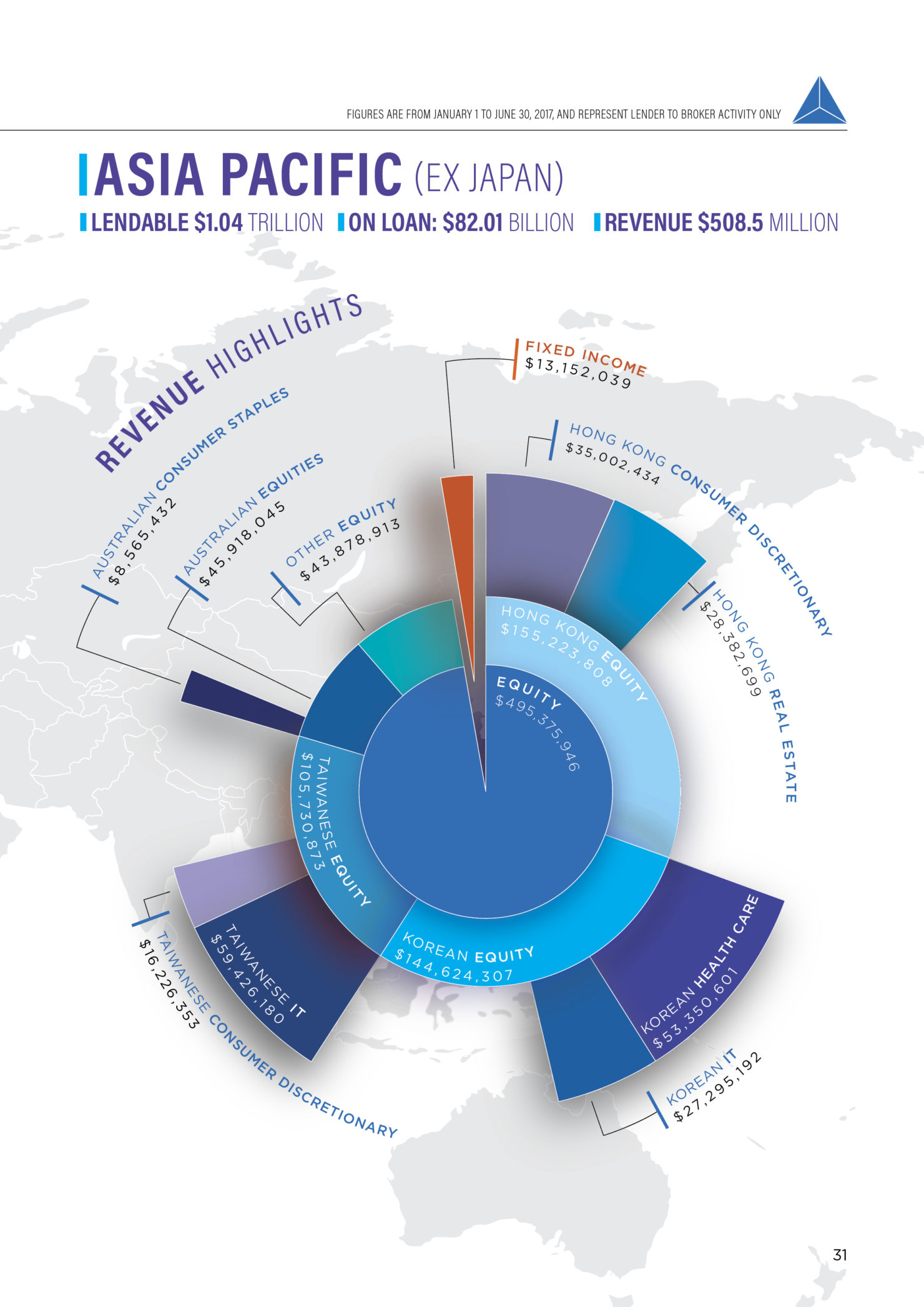